The best rock guitarists spend time improving their skills and getting the best guitar for alternative rock. We believe you have the right to enjoy a great guitar at an affordable price too.

These are the top 3 best Guitars for Alternative Rock we recommend:

There’s a reason why particular models are said to be the best guitars for rocks, whether it’s down to head shape, body construction, pickup configuration or even the likes of that bridge that holds the strings to your guitar – and there’s loads of reasons why the models picked here seem to be most used time and time again on a stage.

These are just some of the best rock guitars in our opinion!

Since first appearing in 1954, the Fender Stratocaster guitar has been a great classic of rock. It has been a staple of rock music since the beginning and has proven to be one of the most emulated guitar shapes in the musical world (aside Gibson Les Paul).

Many competing brands even take “inspiration” from Strat look. Originally, the double cutaway guitar was formerly made for country players. That is because Leo Fender was a big country music fan, but, this guitar has been one of the most popularly used setups appearing in all musical genres, with the humbucking pickup configuration appearing in the harder rock style bands too.

Legends such as Pink Floyd, Clapton, and Jimi Hendrix have at certain points played with one of these, with the likes of Biffy Clyro, adding some distortion to it to produce even more amazing sounds.

Year upon year, the Strat guitar only seeks to improve both in shape and sound.

We recommend getting one.

The Gibson Flying V is a stuff made for legends. First introduced in 1958, Jimi Hendrix toured with a Flying V in 1967 through 1968.

This guitar is not only super aesthetic, it’s also a mixture of humbucking pickups, stop bar tailpiece and has a pretty mahogany neck and body that completely provides this guitar its rock tone.

Whether you want long sustained notes, high gain riffs, or subtle nuances, the Flying V can deliver all these. The Gibson 2019 Flying V, for instance, comes with Dirty Fingers + ceramic pickups that blend beautifully with the rich mahogany tonewood offering gorgeous sustain and the higher gain when you need it.

This option is a great if you’re in a rock band and not only want to sound the part but look it too without being gimmicky. 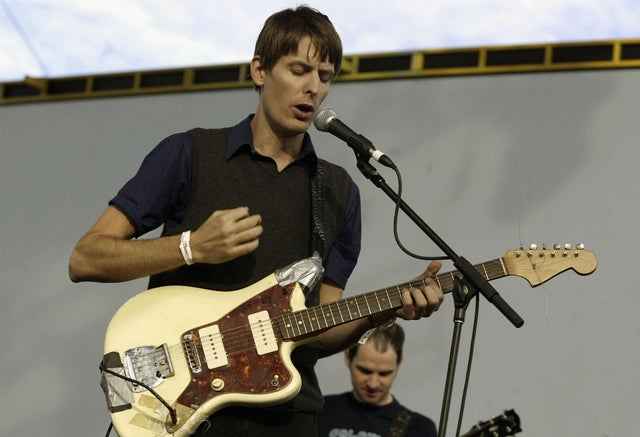 This is another beautiful guitar that made our list of the best guitar for alternative rock music. It was first made public in 1962 and gained notoriety throughout the surf music scene before being discontinued in 1975.

It has a surprising amount of control over your sound since you only have dual pickups to play with, but with many switches with integrated rhythm and lead circuits the Special Design Hot Single-coil Jaguar pickups really deliver beyond expectations.

The non-famous AdjustoMatic bridge with vintage style floating tremolo tailpiece and tremolo lock button all contribute to the pretty and highly sought after guitar sound.

Aside looking cool, the Gibson Firebird spits fire too. In the 50s, Gibson president Ted McCarty hired car designer Ray Dietrich to come up with a new style of guitar to compete with the likes of Fender.

Happy to tell you the result was the Firebird music box. Inspired by the mid-50s tailfins on cars, Dietrich took the Explorer design, rounded the edges and flipped the headstock upside down which led to the guitar becoming unofficially known as “Reverse”.

The P90 ceramic humbucking pickups allows the guitar produce amazing sounds, while the 60s slim taper neck profile is so smooth to play.

The perfect combination of wonderful sounding pickups, Tune-o-matic bridge, mahogany body, and stopbar tailpiece for extra sustain are simple reasons why these instruments are some of the best guitars for alternative rock – they also look cool too!

Being thinner, lighter and quicker puts this guitar on my favorite list. The first model was made back in 1961 and was created to provide players with a great bodied guitar that produces unbeatable sounds.

If what you want is a “Solid Guitar” then we recommend going for the Gibson SG Standard.

The neck and body of the Gibson SG Standard is produced from quality Mahogany, renowned as one of the best woodwoods available and the fretboard features a cream bound rosewood fingerboard with the classic pearl trapezoid we’ve all come to know and love.

The devil horn deign and pickup makes it unique from the rest. The 490T and 490R humbuckers features alnico magnets that gives an ultimate rock tone that can go from sweet, sultry blues to menacing metal riffage with ease.

Power it with a Marshall stack and you’re well on the “Highway to Hell”.

Although commonly associated with metal players, the Ibanez RG550 makes a great rock guitar perfect for you.

If the 90s style is your thing and you love huge tone, dive-in bombing solos, and fast necks, the RG550 Prestige HSH is a wonderful choice, and, quite frankly one of the best guitars for alternative rock out there.

Another cool thing about this guitar is the fact that it comes with a 5-piece walnut/maple neck with really quick Wizard HP profile, that is not only really comfortable to play but designed for players who love shred solos and big riffs.

It is not heavy and is light. Plus, its double cutaway body gives you access to higher frets when the mood takes you and the ingenious prestige fret edge treatment ensures your fingers transition smoothly across the frets for simpler playing.

The Ibanez V Series pickups in a single coil/humbucker/humbucker formation mean you will have a wide range of sounds to scroll through.

It is also one guitar that is ideal for Jazz Players thanks to its pretty playability and super responsive pickups.

What comes to your mind when you think about the best electric guitar? That’s right, it’s the Gibson Les Paul!

Fender Strat and Gibson Les Paul are some of the best sounding (and selling) guitars ever made. First introduced in 1952 by Gibson president Ted McCarty, factory manager John Huis along with inventor/guitarist Les Paul, the Gibson Les Paul was originally only available as a goldtop with two P-90 pickups before appearing with two humbuckers and a selection of sunburst finishes in 1957.

The Les Paul has since become omnipresent within the music scene and stands out amongst its peers due to its reliability, rock-solid build and of course, the pickup sounds.

Our guide here ensures you pick the best guitar for alternative rock music. However, we’d be more than happy to include some more if you believe they fit this list and deserve a spot here.